Celebrating an unconditional love for food!

Nothing binds people like good food, and that is exactly what struck a chord with Prabhjot Singh in 2017 and ever since then, Foodkars has carved its niche as a household name for all foodies in the country.

A true foodie at heart, Delhi-based entrepreneur, and social media tycoon, Prabhjot Singh is the brain behind Foodkars, a community for food lovers who come together to gorge on some of the most delectable delights available across the globe.

With a digital presence on Foodkars.com, Instagram, and Facebook, Foodkars is all about relishing food in its true sense, without making a hole in your pockets. After all, you do not always need a silver fork to enjoy good food!

“Foodkars is not based on an idea, rather it is based on my unflinching passion as a foodie. I had started Foodkars in February (2017) to initiate my food project with a clear vision of discovering the street food of India,” affirmed Prabhjot who was already tagged as a food connoisseur even before he had started to capture and share his gastronomical escapades with the fellow foodies.

“I never thought that we’ll eventually grow into such a large community of food lovers. It was only within a few months of starting Foodkars that my passion for food turned into a go-to portal for all the food explorers out there who were keen on munching on novel delicacies from around the world,” he further added.
Today, Prabhjot’s joy ride of food is closely being followed by 69,000 Instagram users and a whooping 3.2 lacs people on Facebook.

You may have missed

August 16, 2022
From an Interior Designer to a Passionate Chef

From an Interior Designer to a Passionate Chef

August 14, 2022
Celebrating the Festival of Love 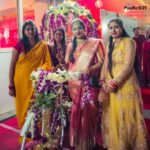 Celebrating the Festival of Love

August 14, 2022
The Food Connoisseur Who Took the Road Less Travelled

The Food Connoisseur Who Took the Road Less Travelled

Bonding Over a Cup of Coffee with Dr Amar Patnaik MP, Rajya Sabha